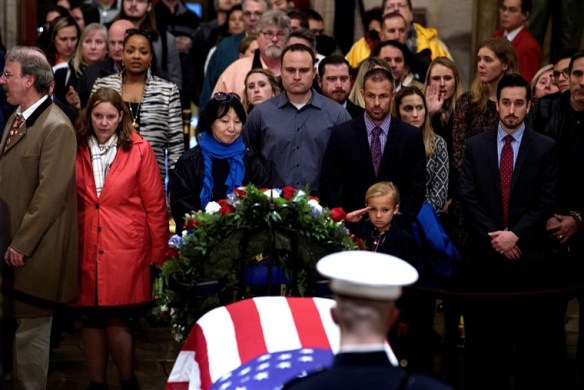 I took my son, George, to pay our respects to President George Herbert Walker Bush last night, a good and decent man.  We expected that any after work crowd would have dispersed by the time we arrived around 9:45, but we instead encountered throngs of people, wrapped around the block, who had come to bid adieu to a great leader. As the hours elapsed in the 35 degree chill, we established some esprit de corps with our fellow citizens and developed creative moves to keep the blood flowing to our numb extremities.

It was a fascinating tableau of America, from fur-clad women to monks in flowing robes, from uniformed military personnel to the young man who’d driven from Ohio.  We made it into the Capitol after five hours, at 2:45 a.m., and were awestruck by the scene.  As President Bush rested on Lincoln’s catafalque, one uniformed member from each of the five branches of service stood sentry under that majestic dome.  Ordinary people saluted, prayed, made the sign of the cross, and just took it all in.

George thanked me for taking him, even as we arrived home at 3:30 a.m., and as we left, we saw thousands still in line to bear witness to the passing of an era.  I hope you will all reflect on the service President Bush rendered to his country and honor him in your own small way.